Steelhead fishing in Alaska is mostly done in the Southeast part of the state and primarily in Yakutat on the Situk River.

There are several other locations that hold steelhead but steelheaders tend to be a private group of individuals. Alaska Steelhead run timing includes a late fall component which is a smaller run and a spring component which is the primary run. Both runs spawn in the spring and if they are able to survive spawning return to the salt to recover and spawn in future years.

There are a couple of unique features of steelhead when compared to salmon. The overall population of steelhead is much smaller than that of salmon. Steelhead are able to survive spawning and spawn multiple times. Steelhead are typically much better biters than salmon. It is not uncommon for a single steelhead to be caught multiple times in one spawning run. All these factors mean that steelhead can be very susceptible to catch and release mortality and overall angler-fish interaction. We encourage anglers to practice sustainable fishing practices such as proper catch and release handling, not targeting actively spawning fish and when possible, releasing steelhead to hopefully spawn again.

Steelhead love beads and worms, seeing a bead or worm drifting down towards their position is like an undeniable treat. There is much debate as to why steelhead consume baits in the freshwater, whether it is a reaction/aggression action or whether the fish are actively eating. In our experience, it appears that both can be true depending on the time of day, spawning phase, or just how the fish happens to feel that instant. 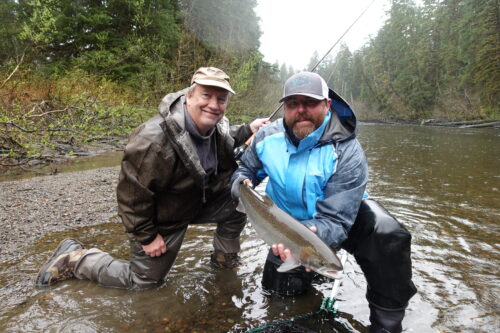 Beads are very effective fished under a float with a weight or system of weights between 18” and 3’ from the bead that allows the bead to bounce down the river bottom at the speed that a loose egg would. Steelhead will often aggressively take brighter colored, larger beads when they have just entered the river from the salt water. Colors like Cerise, Clown, Sweet Pink Cherry, Red, Mottled Red in 14 to 16mm sizes are quite effective. As the fish move upstream, more natural colors like Creamsicle, Shrimp, NW Steelheaders, Peach Gobbler and Pearl Pink become more effective. Hook sizes for steelhead are #4 to #1 with a 10lb to 15lb leader.  Similar to trout fishing, it is important to consider what color of eggs the steelhead may be used to seeing in the water. This is especially important in lower, clearer, and pressured water. Beads are effectively fished in most water conditions except for slow, low conditions.

Worms are not used as often as beads but do offer a differentiated bait in comparison to a bead. Worms are a larger profile bait typically fished on a 1/8th jig head under a small float. This presentation is fished vertically with the jig/worm typically 18” to 2” from the bottom of the river. This larger profile of the worm can be very effective in triggering bites from bigger more territorial fish. Which is why the worm and beads fished through the same area can be quite effective. Worm color selection is often linked to water visibility. For lower visibility conditions 5” worms in Big Foot Canyon, Cerise, Sweet Pink Cherry and Pearl Pink are good choices. For high visibility conditions colors like Nightmare, Low Flow, Black Betty, and Ghost Shrimp in 3.5” or 5” worm trimmed down to 4” on a 1/8th oz jig head are effective. 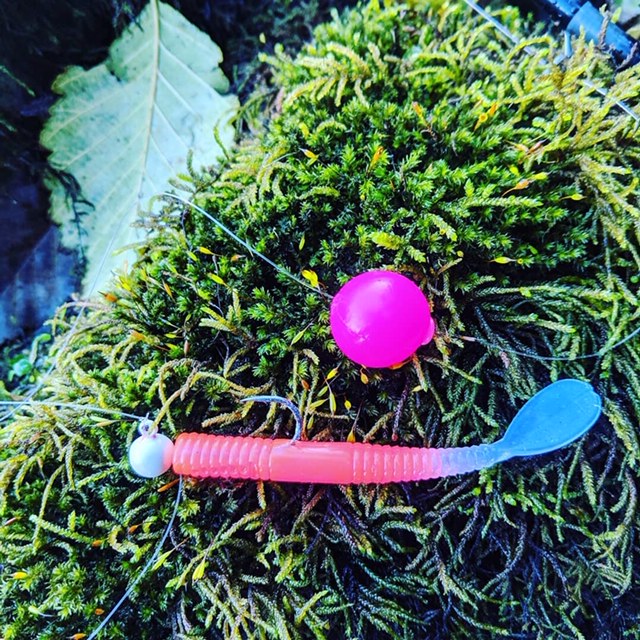 In conclusion, beads and worms are very effective baits for targeting steelhead. Colors and sizes can be adjusted bases on the water level and clarity with larger brighter offerings in early season, high water conditions and smaller more natural colors in lower water and later season conditions.

For Your Next Adventure