Steelhead are typically categorized as being either summer run or winter

This is meant to distinguish between Steelhead that return into fresh water from the ocean in the summer months or winter months. Steelhead are very flexible to given freshwater conditions and there exists a lot of variation in run timing depending on the location. Winter run fish are typically found in rivers less than 100 miles in the ocean while summer run fish may be found in rivers several hundred miles from the ocean.  Winter-run steelhead are present in most healthy river systems, within 100 miles of the coast from northern California to British Columbia. The first fish trickle in before Thanksgiving and the last and sometimes biggest enter in April. Strong populations include the Umpqua River, Tillamook Bay tributaries, Columbia River tributaries below Bonneville dam, Grays Harbor tributaries, Quillayute tributaries and the Vedder System in British Columbia. 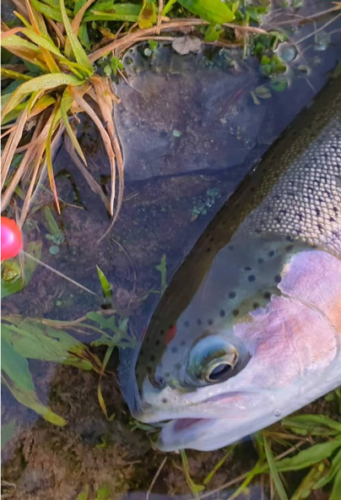 The main contributions to effectiveness are that steelhead-like beads, the development of effective techniques to fish beads and having fishable numbers of steelhead available to fish on. Historically most beads were 10 to 12mm in diameter which limited the conditions in which the beads were visible to steelhead. As the technique evolved with larger and brighter colored beads on the market the ability to effectively fish beads in higher and bigger water conditions evolved with it. Beads are also very effective for targeting summer steelhead when flows are high enough to fish beads effectively. Some of the most effective bead fishing for steelhead can occur during the salmon spawning periods of the fall.

Typical beads size for steelhead is between 12 and 14mm with 16 and 20mm beads becoming more popular in bigger rivers and higher water conditions.

These larger beads provide an appealing bait that is very visible to the fish. When it comes to color selection, we firmly believe that there are several colors that will produce on a given river on a given day. The presentation of the bead to the willing biting fish is as important if not more than having exactly the right color selected. When targeting summer steelhead with beads the 12 and 14mm colors are effective in natural colors like Shrimp, Creamsicle, Peach Gobbler, Natural and Pink Sheen. For winter steelhead in greener water colors like Sweet Pink Cherry, Cerise, Clown and Mottled Red are effective. Hook sizes recommendations are #4 to #1 with 10 to 15 lb. leader. Bobber Doggin is the most common method for fishing beads while suspended bead methods are growing in popularity.

Worms are not used as often as beads but do offer a differentiated bait in comparison to a bead.

Worms are a larger profile bait typically fished on a 1/8th jig head under a small float. This presentation is fished vertically with the jig/worm typically 18” to 24” from the bottom of the river. This larger profile of the worm can be very effective in triggering bites from bigger more territorial fish. Which is why the worm and beads fished through the same area can be quite effective. Worms are able to be effectively fished in small boulder runs when beads may not be effective. Worm color selection is often linked to water visibility. For lower visibility conditions 5” worms in Big Foot Canyon, Cerise, Sweet Pink Cherry and Pearl Pink are good choices. For high visibility conditions colors like Nightmare, Low Flow, Black Betty and Ghost Shrimp in 3.5” or 5” worm trimmed down to 4” on a 1/8th oz jig head are effective. 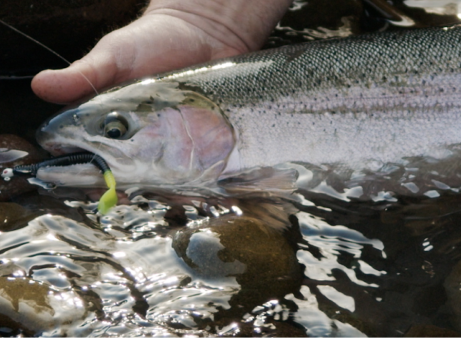 In conclusion, beads and worms are very effective baits for targeting steelhead. Colors and sizes can be adjusted based on the water level and clarity. Larger brighter offerings are more productive in early season, high water conditions and smaller more natural colors in lower water and later season conditions. 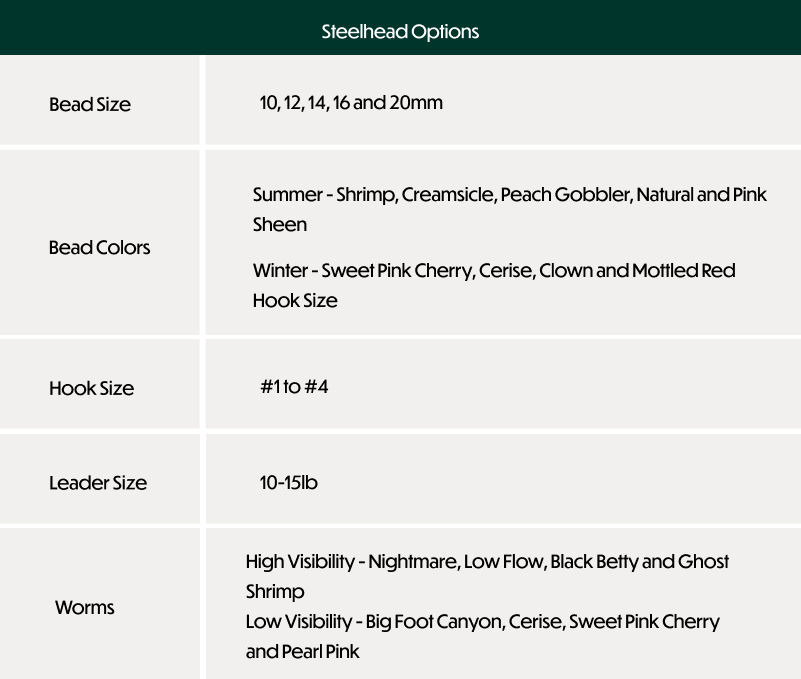 Back to Pacific Northwest Region

For Your Next Adventure